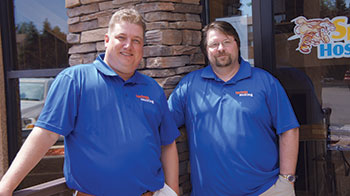 The business model of Springs Hosting is simple, and customer service is the key.

It’s clear that the local web-based startup is doing something right in an effort to provide Colorado residents and businesses with technological support that the company says is “surpassing industry accepted standards.”

Although the company’s name suggests that its primary function is hosting websites and email accounts, the tech-savvy folks at Springs Hosting have an array of services on their menu. Some of the featured services that the company specializes in include consulting, server management, server dedication, co-location and, of course hosting.

What this means is that the company is a virtual one-stop shop for the digitally needy.

“We’re one of those places you can call to get just about everything done,” said Don Brown, the company’s founder, owner and CEO.

Fending off GoDaddy
Despite fierce competition in the global market — companies such as GoDaddy.com are much larger than Springs Hosting and can sometimes offer better rates — Brown said that the business has little local competition.

He attributes the company’s success, international presence and profitability to exceptional customer service, which most will agree is rare in an age of robots and call waiting.

“We’ve spent a lot of time trying to figure out, as we grow, how we can maintain that level of service that makes every customer feel like the only customer,” Brown said.

CIO Jeremy Keefe is Brown’s right-hand man, and he agrees that making every customer feel like the only customer is one of Springs Hosting’s greatest assets.

“Steady growth without losing your personal touch is something that we’ve really focused on, and I think that shows,” Keefe said.

Brown, 38, who started the company from the ground up in January 2006, and Keefe, 42, who joined the firm nearly five years ago after moving from Austin, Texas, both rode the wave of the ‘90s Internet boom into a new century of industry.

They were teenagers when the crest of that wave formed and they made their pastime computer technology. From there, what Keefe calls “the big boom” began, and the two realized that they could make a handsome living by practicing their own passions.

“It started out as a hobby,” Brown said, “and we just picked up customers along the way until we decided to turn it into a business.”

Since then, he and his team of 23 Colorado Springs locals — of whom 12 are core, full-time workers — have amassed thousands upon thousands of clients in every corner of the globe. Brown said that of his 26,000 customers, more than 75 percent are located in Colorado.

Among the clients Springs Hosting represents are Famous Dave’s BBQ, Popeye’s Louisiana Kitchen, The Bank at Broadmoor and numerous defense contractors in the Colorado Springs area.

“We’ve been growing, we are expanding and we’re already working on our next facility,” Brown said. “Growth is inevitable in this business: Either you grow or you die.”

Building on the cloud
The company isn’t only growing economically, but technologically. Brown and Keefe say that they are currently working to “grow the cloud environment,” which refers to web-based networking used to store data seemingly in the clouds.

And with an average customer rating of 96 percent, average savings for 52 percent and a 98 percent customer retention rate, it seems that clients would agree that Springs Hosting is serving its customers well.

“Springs Hosting has been providing outstanding customer service and hosting support to Famous Dave’s BBQ for the past 5 years,” said Famous Dave’s marketing director Dallas Massey in a testimonial at springshosting.com. “The support delivered by Springs Hosting is unmatched by any other IT Company that I have worked with during my 15-year career. I view Springs Hosting as a partner and trust their team with any IT project that comes my way.”

Brown said that he also works very hard to keep the company out of debt, which is why it has owned a southeast-of-downtown facility and everything in it, including a state-of-the-art data center, since 2008. The company spent $2-3 million to build the center alone, which also requires constant updates and maintenance.

Brown and Keefe agree that keeping a casual work environment and happy employees is imperative: Conference meetings sometimes take place at the driving range, the refrigerator is always stocked with food and sodas, and there is an office Beagle named Koby constantly milling about, putting smiles on faces.

“Keeping our employees happy is really, really high on my list and I’ve spent a lot time thinking of ways to keep them happy. If you keep them happy, they continue to work and do a great job, and the customer is happy too,” Brown said.

“If you don’t keep them happy, they’ll leave.”